The threat comes at a time when a lingering drought and market pressures suggest growers will plant a larger than normal crop this year.

“For now, we’re calling this pest the sugarcane aphid,” said Dr. Raul Villanueva, an entomologist at the Texas A&M AgriLife Research and Extension Center at Weslaco. “It was first seen last year. We’re not sure if it’s a new invasive pest or if it just switched hosts, from sugarcane to grain sorghum. But it is a serious threat to this year’s grain crop and at this time there is no proven control for it.”

An insecticide known as Transform WG was tested and found to be effective against this pest, Villanueva said. The Texas Department of Agriculture recently submitted a request to the U.S.Environmental Protection Agency to approve an emergency exemption for its use on grain sorghum to control the aphid in Texas.

It is among 10 pesticides now being tested in Texas and Louisiana for their ability to manage sugarcane aphid populations.

“We’re also looking at biological control of this insect,” he said. “It appears to have lots of natural enemies, including ladybugs, lacewings and sweat flies. But the populations of sugarcane aphids grow so rapidly, we’re just not sure how effective they will be.” 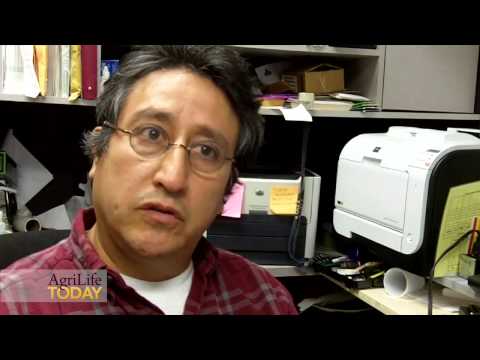 Villanueva said he will supervise the evaluation of two groups of possible candidates, lady beetles and lacewings. Populations of the sugarcane aphid are seen on the underside of grain sorghum leaves. They decrease yields and secrete a sticky waste called honeydew that gums up combine harvesters. (AgriLife Extension photo by Dr. Raul Villanueva)

The sugarcane aphid, about one-sixteenth of an inch long, was first detected in 1977 in Florida sugarcane. It limited itself to the Sunshine State until 1999 when it was found in Louisiana sugarcane, Villanueva said. While populations were well established, they did not cause major crop damage in either state.

“But then in 2013, it was discovered in grain sorghum in Texas, in the Beaumont area,” he said. “Simultaneously, it was also discovered attacking grain sorghum in Louisiana, Mississippi, Oklahoma and other areas of Texas, including the Coastal Bend and the Lower Rio Grande Valley, as well as Mexico.”

Severe damage to grain sorghum in all these areas came quickly.

“In no time at all, growers started seeing dramatic reduction in yields, from 50 to 70 percent,” Villanueva said. “In some fields, crops were completely wiped out.”

Besides decreasing yields, the aphid produces abundant honeydew, a sticky excrement that keeps grain from dislodging from the plant at harvest and gums up harvesting equipment.

“The honeydew also attracts other insects and fungi that discolor the leaves,” he said. “Unfortunately, sugarcane aphids thrive in dry conditions and drought has been a serious issue in Texas for years.”

Mild winters have also helped the aphid survive, Villanueva said, and so far this year, the weather likely hasn’t been cold enough for extended periods of time to slow them down.

“Continued drought and their survival through the winter make for a forecast of serious problems from this pest in 2014,” he said. “And we should have lots of grain sorghum planted this year.”

Grain sorghum is usually a lucrative crop that is relatively inexpensive and easier to grow than cotton, according to Dr. Luis Ribera, an AgriLife Extension agricultural economist in Weslaco. Most of the grain sorghum grown in Texas is used in cattle feed.

“Because of good grain prices, the instability of the cotton market, and drought conditions, lots of growers in Texas are choosing to grow grain sorghum this year,” he said. “We’d expect to have well over 400,000 acres of grain sorghum in 2014, by far the largest crop grown in the Rio Grande Valley.”

Ribera said the farm gate value of grain sorghum in extreme South Texas is $157 million, with a total economic impact on the area economy of $317 million.

Statewide, the crop is worth $974 million to growers with a total economic impact of $2 billion, he said.

Experts in the Coastal Bend are concerned about both yield decreases and the impediment the pest poses at harvest.

Jason Ott, the AgriLife Extension agent for agriculture and natural resources in Nueces County, said estimated losses from the sugarcane aphid in his area ranged between 25 and 50 percent, and as high as total losses in some fields.

Overwintering aphids now being found on johnsongrass and on remnant grain sorghum in fields harvested last year leave the area susceptible to more outbreaks this year.

“In addition to the well documented yield losses, we know from experience last year that the honeydew severely clogs combines at harvest,” he said. “In the Coastal Bend, where approaching storms necessitate speedy harvests, this is particularly concerning.”

Dr. Mo Way, a Texas A&M AgriLife Research entomologist in Beaumont who first found the sugarcane aphid in Texas last year, said because so little is known about the pest, it’s difficult to predict the threat it poses this year.

“We’re just not sure how susceptible the sugarcane aphid is to low temperatures and how many will survive the cold snaps we’ve had,” he said. “But it’s important that growers be aware and on the lookout for this pest.”

Way said growers in the Beaumont area are currently working the ground to plant grain sorghum in late February. He doubts the sugarcane aphid will reduce emerging stands.

“Grain sorghum seed that growers plant here is treated with a product that protects them from early season pests, and I’m guessing it may protect them from sugarcane aphid populations,” he said.

“We didn’t see large populations last year until the grain sorghum crop started heading, when the plant starts producing its grain. But I suspect they were there all along, because populations were so high,” he said.

Way suspects growers may have actually stimulated populations of sugarcane aphids when they applied their normal treatments of pyrethroids to control the sorghum midge, small flies that attack grain sorghum at flowering.

“In addition to killing off potential natural enemies, there are studies that show some pyrethroids have a physiological effect that stimulates the reproductive capabilities of certain insects related to aphids. This stimulation actually leads to unexpected increases in populations,” he said. “But we’re just not sure if sugarcane aphids will be affected this way.”

Way said growers should check different areas of their fields, looking on the underside of leaves for populations of the yellowish green insects. They cause leaf discoloration, and their honeydew makes leaves shiny, attracting sooty mold to the top of leaves.

“AgriLife Extension county agents are informing growers what to look for, but the bottom line is to keep an eye out for anything abnormal,” he said. “Until we can conduct more research, we’re in uncharted waters with this pest.”

Web Wallace, a crop advisor and executive vice president of the Cotton and Grain Producers of the Lower Rio Grande Valley, agreed.

“We just don’t know if it’s going to be a problem, but growers should be on the lookout and be ready in case it turns into a problem.”